I grew up in Kansas. I could always count on summers that were brutally hot and humid. Doing anything during the summer was tough, let alone running.

My first few attempts were disastrous. I wilted in the face of the tough conditions and was reduced to walking. But, these initial, painful, abortive attempts provided some valuable lessons.

The biggest lesson I learned was it’s much harder (shocker!) to run in marked heat and humidity. A different approach is required. Different strategies have to be employed.

While it may not be fun to run in staggering heat and humidity, there are a number of training benefits one can derive from doing so. If you can manage to do it a few times a week, you’re looking at a decreased heart rate, increased oxygen consumption, and improved exercise economy.

While it’s not really possible to beat the heat, the strategies I’ve outlined below should at least enable you to manage the heat better. If you can deal with running in the heat a few times a week, you’ll inevitably become a better runner. 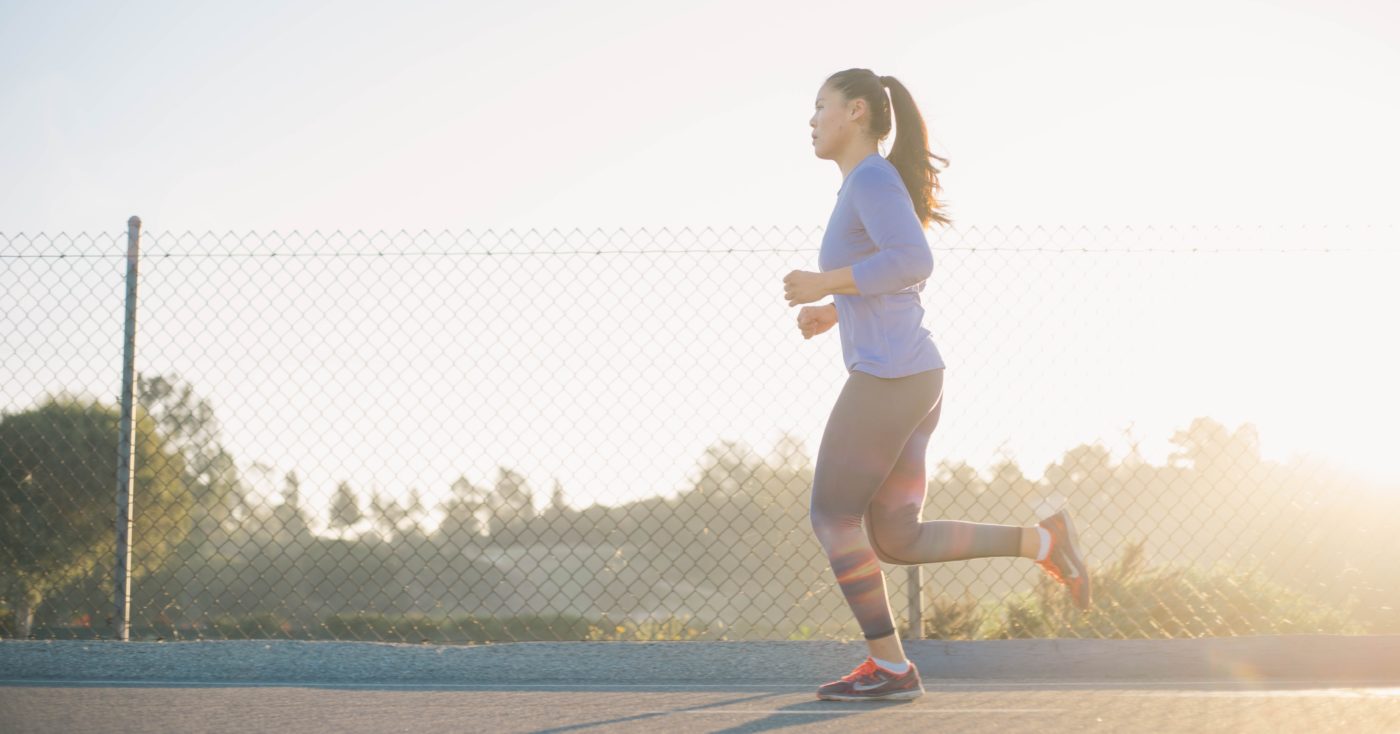 If your urine is clear and copious, you’re likely ready to go. If it’s a darker yellow (or amber) color, you need to take in more fluids. You don’t want to head out on a hot and humid day for a run if you’re not well hydrated. Take care of this before you start your run.

Hydrate early and often during your run. I generally encourage taking fluids every 15-20 mins (or according to thirst). Given that you’ll likely be sweating more than usual, it’s critically important that you ingest not just water, but electrolytes as well. Hydration is always important, but it’s particularly important when running in hot and humid conditions.

Once you’ve completed your run, make sure you drink plenty of fluids to re-hydrate. Again, let the color of your urine be your guide. If it’s clear (and copious), you’re good.

Whatever you wear in normal conditions is probably more than you need on a hot and humid day. I’d generally say less is more. Think minimal.

I’d also recommend a frozen bandanna. A few hours before your run, soak a bandanna in cold water and put it in the freezer. Before you head out for your run, take the frozen bandanna out and wrap it around your neck to help keep you cool during your run.

In a similar vein, you can soak your hat in cold water and throw it in the freezer for a few hours before your run. While the cooling effect of the frozen bandanna or hat might be short-lived, it absolutely makes those first few miles more tolerable.

Schedule your runs during cooler times of the day

My biggest mistake in attempting to run in the unforgiving summer heat and humidity of Kansas was timing. I foolishly headed out right around noon when the sun was high in the sky and the temperature on the thermometer was perilously close to 100. It’s a mistake I never made again.

All my subsequent summer runs were scheduled strategically. I’d run early in the morning before the sun came up. Or, I’d run late in the evening after the sun had dipped below the horizon.

Be smart about when you schedule your summer runs. Don’t schedule them during the hottest time of day. Identify the times during the day when it is coolest and plan accordingly. Before the sun comes up or after the sun goes down are likely your best options.

Seek out the trail (and/or shade)

Asphalt and concrete radiate heat back onto your body. It also can be tougher to find shade on these surfaces. So, eschew these surfaces (if you can) and seek out the trail.

The trail promises trees, foliage, and other natural providers of shade. More shade promises cooler temperatures. It also promises a bit of relief from the heat.

If running on the trails isn’t a viable option, seek out routes that include an abundance of trees, buildings, or other sources of shade.

Whether you’re on the trail or on asphalt/concrete, aggressively seek out shade whenever possible.

Cut yourself some slack

Your schedule calls for a grueling session of 800 meter intervals at the track. But, it’s 90 degrees with 75% humidity. Performing at a high level is unlikely given these conditions.

It’s not realistic to think you can perform the way you normally do on a day when it feels like a sauna outside. So, cut yourself some slack. Whatever you have lined up, do a bit less.

With this in mind, it’s a good idea to slow down. I generally encourage my runners to let go of pace on hot and humid days. It’s a better idea to simply focus on level of effort when you’re feeling the heat.

Opt out (of running outside)

While there are a variety of ways to manage the heat, there is a time to simply not do it. Once the heat index (combination of temperature and humidity) creeps above about 90 degrees, running outside not only might not be a good idea, it might be dangerous.

If you’re staring down a dangerously high heat index, opt for the treadmill and take care of your miles inside an air conditioned gym. Discretion is sometimes the better part of valor.

Want to hear more from Marathon Matt? Find out more about his coaching and running experience at www.marathonmatt.com!

Marathon Matt has been a passionate runner and full-time running coach for more than 20 years. In addition to having USATF/RRCA coaching certification, Matt has coached with thousands of runners via his own Run Club SF, corporate running programs, and personal coaching programs. He's conquered countless 5Ks, 10Ks, half marathons, marathons, and even a couple ultras (50K and 50 miles). His running resume includes multiple Boston Marathon qualifiers, a 1:16 half marathon, and a 2:43 marathon. Matt's contributed to Active.com, Runner's World, Competitor Magazine, Motiv Running, and a litany of other publications. Want to work with Matt? Drop him a line at marathonmatt@marathonmatt.com