As we saw with the Brooks Adrenaline 19, Brooks is completely shaking up the way they approach stability in running shoes. They’re ditching the old density posting for GuideRails, a dynamic stability system meant to guide your ankles and knees into alignment while running, as opposed to trying to correct for a certain amount of overpronation. Brooks has been developing GuideRails ever since they introduced them in the Transcend six years ago, and they’re now confident enough in them to apply them to their stability shoes across the board. The latest shoe to get the GuideRails treatment is the Brooks Ravenna 10 — once a light stability shoe, the Ravenna 10 is now open to runners at all levels of stability, as long as they’re looking for a more lightweight, responsive shoe.

If you’re familiar with Brooks’ core lineup, it’s now easier to understand than ever. In the neutral category, they have the Launch, the Ghost, and the Glycerin (from light to high cushion). The Ravenna, Adrenaline, and Transcend are now almost identical to those three shoes, respectively, but with GuideRails added in to provide stability instead of density posts. The Ravenna 10 is the stability analogue to the new Launch 6, a lightweight, responsive shoe that many of our runners love to use for faster workouts, or even on race day. Brooks uses their BioMoGo DNA cushioning throughout the midsole in the Ravenna 10, leaving off the softer, more impact absorbent DNA Loft foam we saw in the Adrenaline 19 and the Transcend 6. That makes the Ravenna much lighter than the Adrenaline, at 9.4 ounces for men and 8.3 ounces for women. 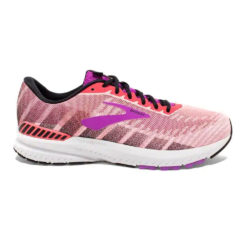 But, if you like a lower drop with your speed-oriented shoe, the Ravenna 10 isn’t quite it. With a 10 mm drop, the Brooks Ravenna 10 props you up a bit less than the 12 mm drop Adrenaline 19 — it’s a noticeable difference, but not a huge one. If you’re a runner who wants something on the lighter side, but gets beset by Achilles and calf strains easily, the Ravenna 10 could be a really good option, because there aren’t too many really solid lightweight trainers that have this high of a drop. 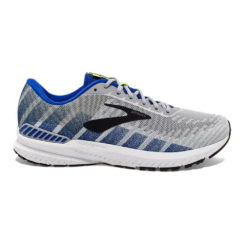 The GuideRails in the Brooks Ravenna 10 put the focus on knees, rather than the foot and the build of the shoe. The idea is to guide the foot and the ankle into alignment to ensure that the runner’s knee doesn’t start turning in, which can cause any number of running-related injuries, from shin splints to IT band syndrome. They manage this by adding a dense rail of foam that runs along the outside edge of the footbed, which serves to nudge the foot back into place when the runner starts to overpronate. That means GuideRails can work with any level of overpronation, and it means that they won’t overcorrect a neutral runner or a runner with light overpronation — if everything’s in alignment, the shoe won’t mess with anything!

Up top, Brooks has used a firmer mesh than with other shoes — it fits a little more snug around the shoe, as you’d expect from something meant to be on the speedy side. That helps to ensure the foot doesn’t slip around inside the shoe too much, making for a shoe that feels secure without feeling tight or restrictive.

By using GuideRails, Brooks has managed to turn the Ravenna 10 into something we just don’t see enough of — a real option for runners who want a lightweight, speedy stability shoe. Fortunately, Brooks is being joined by a few other brands in thinking of new, more adaptive ways to provide stability, so we’re pretty sure we’ll be seeing a lot more shoes like this in the near future. But, for now, if you have the need for both speed and stability, the Brooks Ravenna 10 is one of the best options out there!

Is the Brooks Ravenna 10 right for you? Use the Fitted Running shoe consultant to go through our gait analysis process and find out!