Mizuno’s staple shoe for neutral runners just got an update! The Mizuno Wave Rider 22 is the company’s latest version of their decades-running moderate cushion neutral shoe, one that exists alongside other popular long-distance trainers like the Nike Pegasus, Brooks Ghost, and Asics Nimbus. Mizuno has carved out a niche for itself by making running shoes that favor structure and responsiveness over a softer, cushioned feel — their calling card is the plastic Wave Plate that curves through the heel out to the midfoot, acting like a springboard. Traditionally, a Mizuno shoe is a trainer that has all the cushion of a high-drop, foam-cushioned shoe, but with the springiness of a much lighter shoe. This year’s Mizuno Wave Rider 22 doesn’t stray too far from that classic formula, but Mizuno has made a few changes to make the shoe feel lighter and more comfortable on the run. 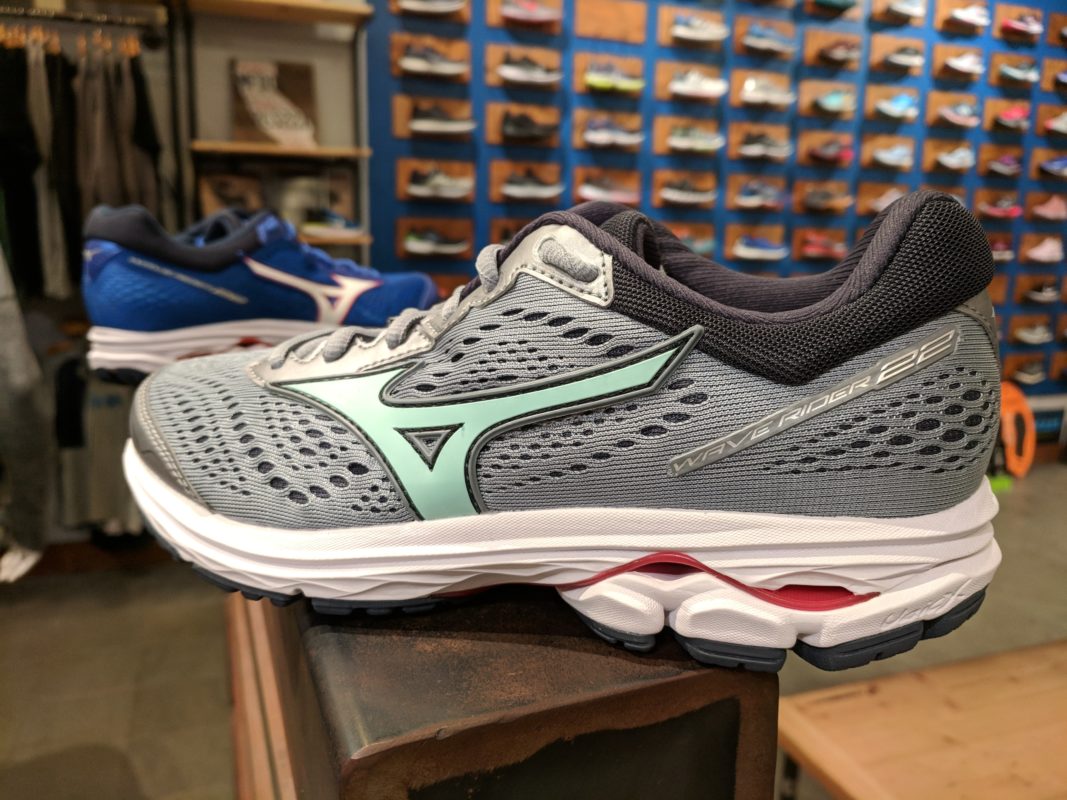 Like many others in the running shoe game, Mizuno is going all-in on mesh uppers. The Wave Rider 22 has an all-new two-layer engineered upper that wraps up around the entire shoe, making the Wave Rider a lot more breathable and little less restrictive than before. But, longtime Wave Rider wearers shouldn’t expect a huge change — Mizuno has opted not to go with a knit mesh upper (increasingly popular among running shoes). This engineered mesh upper still has a traditional plastic toe cap and holds its shape pretty well, so while the Wave Rider 22 ultimately does feel a bit more roomy, it’s still got the usual structured fit that we’ve come to expect from Mizuno (including a relatively snug heel counter). The result is a shoe that’s still well-suited to runners with narrower feet, but with a little less bulk on the upper than in years past. Ultimately, the biggest change should be a welcome one for everyone — the mesh on the Wave Rider 22 makes for a much more well-ventilated shoe, helping to keep your feet from overheating on the run.

Mizuno hasn’t changed much in the midsole. Their Wave Plate is still the focal point, helping to make the shoe feel firmer and more responsive. Like before, it’s sandwiched between two kinds of foam — a softer material below the Wave Plate that absorbs impact well and a firmer foam up top to make the shoe feel a little more structured. But, with a little more material included here than in last year’s Wave Rider 21, the Mizuno Wave Rider 22 does feel a little softer than before. Again, it’s not a huge change — if you didn’t know it before, you’d probably be able to guess that the Wave Rider 22 is a Mizuno shoe.

The Mizuno Wave Rider 22 has a 12 mm drop, meaning it’ll still be a strong choice for heavy heel strikers. The shoe does a great job of absorbing impact while remaining flexible and responsive enough to push runners through their stride effectively. Part of how Mizuno has accomplished that is by making the Wave Rider 22 more flexible in the forefoot — we were pretty surprised about how much give there is in the front of the shoe!

The Mizuno Wave Rider 22 is by no means a reinvention of one of Mizuno’s core shoes, but there have been some significant changes. While the structure and impact absorption is still there, a more forgiving mesh upper and a more flexible forefoot make the Wave Rider 22 more suitable for anyone who wants an everyday trainer that can handle some speed work in addition to longer runs. Runners with narrower feet will still feel right at home, as will runners looking for a firmer ride — and with the Wave Plate still at the heart of it, we’re still getting a really fun shoe to use!

Is the Mizuno Wave Rider 22 right for you? Use the Fitted Running shoe consultant to go through our gait analysis process and find out!